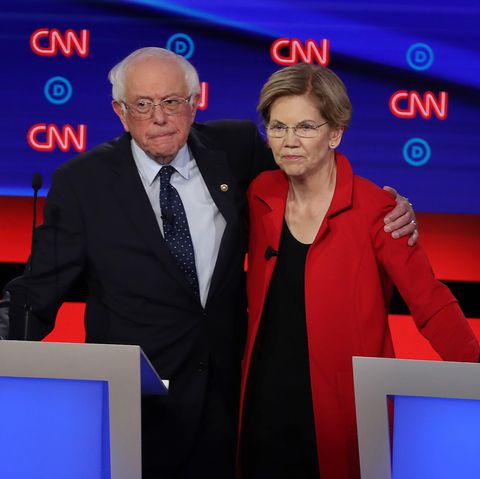 I’m a leftist social worker and in this primary cycle I had a dilemma of being a Elizabeth Warren supporter or a Bernie Sanders supporter. I ended up being an enthusiastic Berner in early December 2019 and more so once he came back on the campaign trail after experincing a heart attack.

There was a tweet from a Warren supporter I read the other day that made me really question myself.
I can’t recall the exact words of the tweet but the argument went something along the lines of this feeling of betrayal that after experiencing a heart attack as a 78-year-old man, Bernie was too much of an egotistical narcissist to continue his campaign instead of dropping out and endorsing his progressive ally Warren, and really give an amazingly talented woman the opportunity to become president.

I have to admit, this is a solid point. So many Berners before Super Tuesday were pleading Warren to drop out and endorse Bernie (and for the record, I disagreed with these Berners and got into a good number of disagreements with them on Twitter), but in hindsight maybe the person who actually should have dropped out first was Bernie.

I think back to what my reasoning was. For me, back in December when Bernie had a heart attack, my immediate thought was, “oh my god, what happens to the #NotMeUs vision now?” This was after Warren had released a Medicare-for-All pay-for plan that to me made absolutely no sense and which felt like political theater to try to assauge unfounded fears about raising taxes. At this point my mindset was that there was only one presidential candidate saying that we needed a people-funded movement that would continue their political participation to enact a progressive vision of Medicare-for-All, Green New Deal, and Palestinian dignity.
That I did not think instead that the other progressive woman should now carry the mantle instead is probably a case to make that I did operate with unconscious sexist bias.

In my mind Bernie was the best candidate, and on some issues, the only candidate saying the things I agreed with. That I had this purity test in my mind perhaps is a good thing to criticize me about why I ended up preferring Bernie over Warren.

For me, I believed in Bernie’s theory of change more than Warren’s. I loved Bernie’s idea that change happens by millions of people being politically involved, by calling and emailing local politicians and trying to get our voices heard in rallies and mass protests. He laid out a bold progressive vision and said that if you want Congress to pass our progressive laws, we will have to fight alongside with him. That may result in compromises and most likely Medicare-for-All could turn out to be watered down as public option but we were going to start the fight at the level that we wanted. We were not going to start the fight having made compromises with ourselves.

Warren’s theory of change was about detailed plans, brokering deals with the right players and using executive orders where appropriate. She said that she has a plan for all various issues and problems and we can count on her to fight for us.

I respect and admire Warren greatly. On some issues like disabiliy rights and racial justice and her “Blue New Deal” plan, I thought she had the best, most detailed plans. On some others like her Medicare-for-All plan, and her plan to combat disinformation, I thought the plans had fundamental flaws and Constitutional concerns. On some other issues, I just preferred Bernie’s, particularly Housing for All and foreign policies.

There’s no denying she was the smartest candidate. That she took the time to meet everyone who came to her events and take pictures together is an incredible commitment that no other candidate showed.

So there is probably something there that I still ended up a Berner. Did I have a sexist bias? I can’t completely deny it. I did end up valuing how much I agreed with someone’s platform and record more than the idea of the first woman president.
I also dont deny at all that Warren experienced sexism like crazy during her campaign. All the snake emojis, being considered not as likeable or as authentic as Bernie, all that wad def very sexist in nature. People without a college degree couldnt relate to her. There’s probably a great deal of sexist bias involved in that too.

I write all this to just reflect on Warren’s run. I appreciate the hell out of Elizabeth Warren. I wouldn’t have minded Warren beconing the democratic nominee. In fact, I would have been very enthusiastic about that. I also like Julian Castro so much and was so heartned how Castro campaigned so hard with Warren.

And me, I wouldn’t have liked anyone else. I did not like Kamala Harris and Amy Klobuchar because of their record as prosecutors. I did not like Pete Buttigieg because he was always sooo vague with his policies and his ideas. His record with his black constituents as a mayor was troubling. I did not like Beto O’Rourke because he was too dracoanian on 2nd Amendment rights. (Yes, guns is probably the thing I’m actually not that leftist on). I admire Cory Booker but I did not like his record when it comes to charter schools and ties to pharmaceutical companies. I do not like Joe Biden at all. I found Tom Styer annoying. I loath Michael Bloomberg. I respected Tulsi Gabbard’s integrity until she voted “present” in the impeachment trial.

For me, by January, I only had 3 candidates I actually wanted to be nominees: Bernie of course, Warren, and Andrew Yang.

I really do wish Warren was received better by the American public. I acknowledge I didn’t help Warren at all as a Berner. I actually don’t deny sexism was a huge part of why she didn’t get as far as she should have.

For me, it’s not that Warren wasn’t the right woman candidate. She really was such an amazing candidate, one I actually would have fought hard for to become president. Unfortunately, and maybe this is where I operated with a sexist bias, I just liked Bernie so much more…